New Theory for MH370: Oxygen fire, west toward the Maldives.

A new theory on the fate of Malaysia Airlines flight 370 has been proposed by Stuart Yeh, an associate professor at the University of Minnesota. As you can see from his profile, he is no stranger to analyzing complex problems

Like all good theories, this one incorporates previously known, but incongruent observations left out of most previous theories. The synopsis is that the airplane suffered an electrical malfunction and fire in its crew oxygen system. This ruptured the fuselage, resulting in a decompression. Because the crew oxygen system was affected, the crew's estimated time of useful consciousness was only about 20-30 seconds at 35,000 feet.

A similar fire had occurred in an Egypt Air B-777 in July 2011—its serial number was only 3 numbers different than the B-777 flown by MH370. That fire occurred on the ground, was quickly attended to by the crew,  yet burned a significant hole in the right side fuselage, and completely damaged the cockpit. 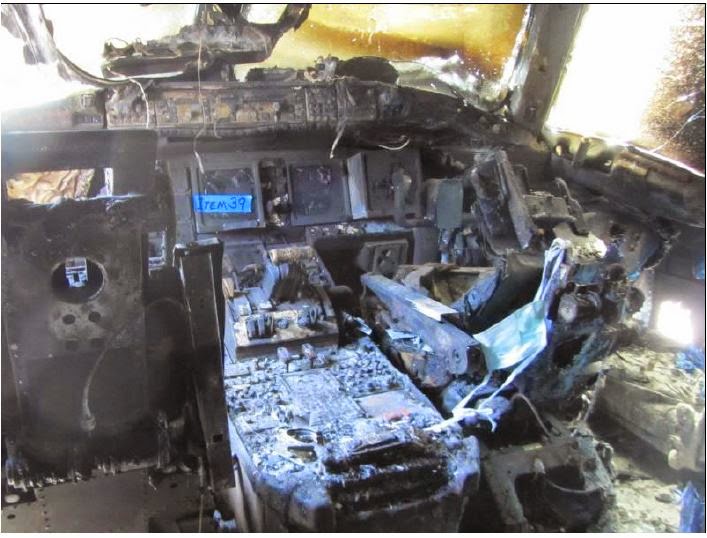 The theory supposes that the crew, in an attempt to fight the fire by removing electrical power to the highest degree possible, shut down the aircraft's generators (two overhead switches) which resulted in the apparent failure of the transponder.

In the Egypt Air case, the accident report states that "the fire was easily seen from the outside."  In the MH370 case, Mike McKay, a New Zealander working on the Songa Mercur oil drilling platform in the South China Sea observed an aircraft at high altitude burning in one piece about 50-70 km from his location, shortly after MH370's first officer radioed his last message.  His letter is here 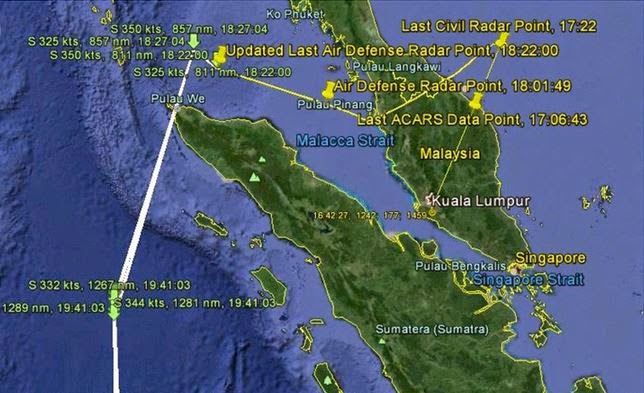 There were very few radar hits on MH 370 after ATC radar  contact was lost with the loss of the transponder. The theorized flight path from the few contacts it had with military radar indicate the airplane was heading westbound until it intercepted an arc constructed by analysis of data from an INMARSAT satellite that had brief hourly contact with the aircraft. That turn of over 90° is perplexing and generally unexplained, but probably would have had to have some type of crew action to make it happen.

In Mr Yeh's theory, that unexplained turn didn't occur at all and the airplane continued on its westerly heading. 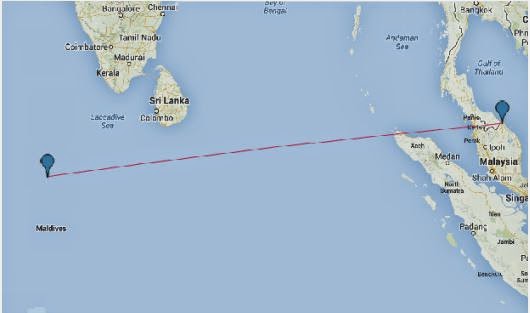 The satellite contact data has never been used to locate an aircraft before, and an analysis of that communication record yielded patterns of doppler shifts and latencies that were used to plot a line of positions for those hourly transmissions. Some assumptions had to be made in those calculations. One of them assumed that the time it took to process the signal was the same throughout the flight.

Also, at about the estimated time of fuel exhaustion, residents of Kudahuvadhoo in Dhaalu atoll in the Maldives reportedly saw a low-flying white aircraft with red stripes flying north to south-east around 6:15 am local time on the morning of March 8, flying so low that the aircraft doors were clearly visible. No regular flights fly over the atoll at that hour. Dhaalu atoll is 1900 miles due west of Malaysia, on the last known flight path of MH370. The markings on the unknown aircraft are consistent with the markings on MH370.

Finally, the acoustic signal detected by two sets of underwater listening devices off of the coast of western Australia matches the hypothesis that MH370 crashed near Dhaalu Atoll, but is inconsistent with the hypothesis that the aircraft crashed off the western coast of Australia. Researchers used the information from the two devices to "triangulate" the distance to the source of the signal and eliminated the possibility that the source was located off of the coast of western Australia.

The sea west of the Maldives is extremely deep, like the Austrailian search areas, often 12,000 feet or more. The area is remote. Black box locator beacons (pingers) are long expired, any floating debris will be far from a crash site with the prevailing current flowing west toward Africa.

So, what's to be done?
Mr Yeh states:
The analysis that I offer suggests that search efforts should be redirected to the area southeast of Dhaalu Atoll in the Maldives. I suggest that the towed underwater sonar device be used to sweep this area in an effort to locate debris that presumably sank to the ocean floor. While some debris may have remained afloat and may eventually wash ashore on the east coast of Africa, the aircraft is a metal structure and, therefore, most of it would have sunk to the bottom of the ocean in the vicinity of the crash location, just as much of the debris from Air France 447 and the debris from TWA 800 was eventually located on the ocean floor.

How can we know that this is the correct location? I cannot offer a guarantee that this is the correct location. However, there is an array of seemingly odd information that appears to only make sense if my hypotheses are correct. I believe that I have assembled the known facts into a coherent explanation of those facts. It is an educated guess, but I believe that it is a better guess than has previously been offered.

As the report is refined and updated, the current version of Read Stuart Yeh's report is always posted here:
http://works.bepress.com/cgi/viewcontent.cgi?article=1018&context=stuart_yeh

All the documents cited in the article can also be found and downloaded from this Box.com site:
https://app.box.com/s/jbfrbkpwcuq7uf8apjxp

With respect I myself considered an oxygen fed fire in the cockpit, but discarded this when I learned that MAS had complied with an airworthiness directive to swap conductive 02 hoses with non conductive. Otherwise however I still believe electrical fire in the MEC was the most likely cause.

It is fairly obvious from several ATSB reports, particularly the Bayesian Analysis DTSG report published by the ATSB on December 3, 2015 that MH370 suffered electrical failure between 18:03 and 18:43 and then later double engine flame out characteristic of hypoxic flight. What is it about electrical failure however which could cause hypoxia?

Fire seems the obvious link but people argue there is no way crew would not have donned oxygen masks, but they miss an important point.

When there is smoke in the MEC of a Boeing 777, crew receive an ambiguous EICAS alert stating EQUIP COOLING OVRD which crew had to look up in their QRH handbook. Unconsciousness at 35,000ft takes just 30 seconds. When they reached the relevant page in the B777 QRH it told pilots to wait 2 minutes whilst smoke cleared.

Why would smoke clear during that 2 minutes?
Because the aircraft was programmed to vent cabin pressure from the MEC. Do that at FL350 and you have a crew unaware that they need to don oxygen masks.

This is the simple explanation how MH370 suffered decompression without crew awareness. Pilots never switched off their ACARS or transponder. Electrical failures disabled comms. SAT data was spoofed by electrical failure, fire or even the effect of super-cooling of avionics at 35,000ft.