New ebook out on Airbus Fly-by-Wire

My latest ebook on the workings of the Airbus fly-by-wire flight control laws is now available. 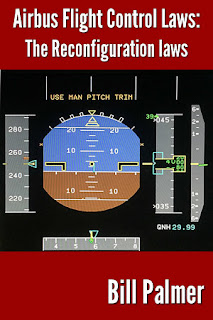 In the previous publication A330 Normal Law: Putting Fly-by-wire into Perspective, I gave a brief history of fly by wire technology (older than you think) and the details of Airbus’ implementation of fly-by-wire to make a safe, intuitive, and well behaved flight control system a reality: Normal law. Included are the handling characteristics and how they differ from a conventional airplane, the protections provided by the system, even an example of the unexpected effects of the protections.


This newest release, Airbus Flight Control Laws: The Reconfiguration Laws explains what happens when Normal law can no longer function with a review on aircraft handling, stability, and how each of these different operating laws operate. Covered are Alternate, Direct, and Abnormal Attitude laws, and a condition when there are no laws at all: backup control. Also introduced in this edition are differences between the different Airbus families (A320, 330/340, and 350) for each of these situations. While there are many similarities, the capabilities of the protections and autopilot functions for the various models have expanded over time as each new model was introduced.


The focus is from the pilot’s perspective, with emphasis on handling characteristics and their implications and not on the mechanical and computer architecture that each model uses to carry them out.  It is written so that even seasoned Airbus veterans will gain new insights something about their airplane, yet it remains accessible to any aviation enthusiast.


You’ve read the Airbus vs. Boeing discussions, but can you spot the errors in their arguments? If you want to know what all the fuss is about, this will get you well on your way to being literate on the subject.

Eight years ago on the night of May 31st, 2009, Air France flight 447 from Rio de Janeiro, Brazil was lost in the Atlantic Ocean north of Brazil.
Virtually every aviator today knows the number 4-4-7 and the unnecessary tragedy it represents. The initial reaction of many was “how could this happen?” How could three airline pilots possibly lose control of their aircraft in under a minute and kill everyone on board within 4 ½ minutes of the autopilot disconnecting—essentially because the autopilot disconnected?
But the world of aviation has not sat idly by in its aftermath. The NTSB has a saying: “From tragedy we draw knowledge to improve the safety of us all.”
Much like the June 1975 crash of Eastern flight 66 at JFK due to a microburst, and the follow-on windshear crashes of Pan American 759 in New Orleans (1982) and Delta 191 in Dallas-Fort Worth (1985), these accidents lead to increased research and education on the weather phenomena and the development of windshear warning systems, both on the ground and as airborne equipment.
Also like the December 1974 crash of TWA 514 into the mountains outside of Washington, DC, which lead to the increased awareness of minimum safe altitudes, the installation of the basic Ground Proximity Warning Systems (GPWS) on all transport aircraft and the subsequent development of the modern look-ahead GPWS systems.
In each of these cases, the development that resulted in the aftermath of these accidents significantly reduced or virtually eliminated those causal factors in the years since.
Loss of control in flight (LOC-I) now remains as the leading accident factor in the few accidents and incidents we see in recent times.The loss of Air France 447 and another LOC-Iaccident earlier that same year, Colgan 3407 on February 12, 2009, spurned:
And while most of the emphasis is focused on human flying skill (and rightly so), technological advancements have also been taken, almost surely with this accident in mind. The new Airbus A350’s autopilot now can remain engaged in all but the most extreme situations, thus far reducing the instances where pilots are unexpectedly handling a causal factor (e.g., weather), system malfunction, and autopilot disconnection all at the same time. The system allows the airplane to recover back to within the normal flight envelope from extremes of speed, bank, and pitch and reduces the other recovery maneuvers that must be hand flown by providing for the capability of the autopilot to fly windshear and TCAS traffic resolution advisory maneuvers automatically, and allow the pilots to take over when they are ready. Enhancements to the weather radar allow for better analysis of a storm and provide an aural warning should one several minutes ahead go unnoticed.
Yet, still, the problem of LOC-I has not been eliminated, even though the lessons of AF447 seem loud and clear. Air Asia 8501 in December 2014, stands as a stark reminder that continued diligence is required.
Commercial aviation is very safe, it is in fact amazingly safe, but it is not inherently so. It is safe because a lot of people work hard every day to make it that way, and to keep it that way.