A B-777 flaperon, almost certainly to be determined to be from the missing flight MH370 turned up on Reunion Island, located off the east coast of Madagascar.
As  of today, it's been over 509 days that's  about 12,400 hours. I give the figure in hours, because when applied to a  drift rate that will easily reveal how many miles this part may have traveled before showing up on the Reunion Island beach, 600 miles east of Madagascar.

Some Indian Ocean-current charts look fairly simple. Like this one. But even there. a plane crashing just about anywhere in the entire Indian Ocean could have parts end up near the shores of Madagascar eventually.

This chart, from the Kenya Meteorological Department, shows that the currents may be a bit more complex than the simplified illustration above. In fact, the Indian Ocean currents are full of meanders and eddies that slow and complicate the drift journey.

The effect of the wind on any floating object will depend on the profile of the object and how much of it sticks up out of the water. Some areas are know for their 40 knot or greater winds!

Looking at the tracking data for drift buoys released after the  Air France 447 crash on June 1, 2009  it becomes clear that performing a backwards drift calculation is a difficult proposition. This illustration covers two weeks. Working backwards over 17 months with only a few specimens (one or two so far) places the possible origins virtually anywhere in the entire ocean. 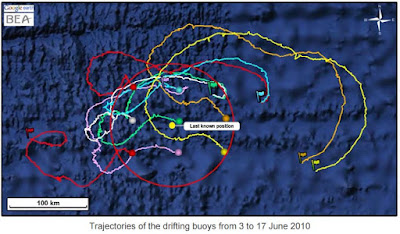 Let's look at a couple of 12,000 mile possibilities based on the simplified current chart above. : 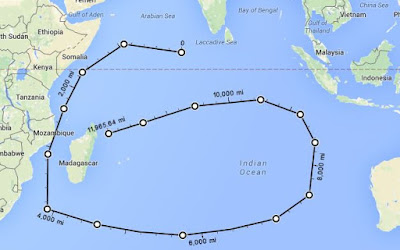 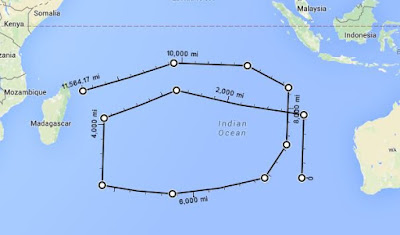 Some maps have been drawn and drift plotted to show that debris from the theoretical crash sight off of southwestern Australia could have ended up on the Reunion Island beach. But, what other locations in the Indian Ocean would also land parts in the target area? It's not a stretch for the part to have circled parts of the Indian Ocean several times, depending on which chart of ocean currents you refer to.

At this point, nearly 17 months after the loss of the aircraft, determining where it started out is kind of like trying to figure out the address a car started from based on the off ramp it took from the interstate, when it's been gone long enough to cross the country three times!

Perhaps what this find will do mostly is to show that the airplane did in fact crash somewhere in the water, and  that it was not hijacked to Kazakhstan, or even shot down as MH17 over the Ukraine.

I find that many people simply underestimate the situation of 20,000+ square miles of ocean, much of it 3 miles deep. Cases in point: