Repeat after me: "Declaring an Emergency, Proceeding Direct"

While it was supposed to be flight planned to fly to its destination of Medellin, then its alternate Bogota, and then for an additional 30 minutes, upon arrival in the Medellin area it was only minutes from total fuel exhaustion.


The aircraft had been flight planned to (or beyond) its maximum range. According to the Wikipedia article, this operator had repeatedly flown to or beyond the legal limits of the airplane. In all likelihood, the PIC was blatantly reckless. Arrests have been made and government officials suspended, but that's not the point of this entry.

Approaching its destination of Medellin, the flight was issued holding instructions due to another aircraft that had, ironically, a fuel situation. That would later be determined to be caused by a malfunctioning fuel gauge. That flight was making a precautionary landing and had been given priority. LMI2933 was third in line for landing and had been issued a holding pattern. At the point they entered the holding pattern, they had six minutes of fuel on board.

this doesn't mean that you wait to declare an emergency until you have less than 30 minutes of fuel on board, but as soon as it looks like you'll land with less than that

LMI2933 mentioned to ATC an “issue with fuel”, but that is a long way from declaring an emergency, which they eventually did, but not before they had apparently already run out of fuel, saying "Lamia 933 is experiencing a total failure, total electrical failure, out of fuel." The electrical failure, was of course due to the fact that the engines had stopped working due to fuel starvation. The airplane was already in a descent due to engine failure at the time they asked for radar vectors to the airport.

ICAO (International Civil Aviation Organization) requires "If the PIC calculates that the flight will arrive with less than reserve fuel (30 minutes minimum), then it is required to declare a Mayday-fuel." Note that this doesn't mean that you wait to declare an emergency until you have less than 30 minutes of fuel on board, but as soon as it looks like you'll land with less than that on board, even though you may have much more on board at the time.

It should have been clear to this crew that this had been the situation for a while. Other than proper flight planning and landing at an airport short of the stretched limit of Medellin, the crew should have declared and emergency due to fuel as soon as they contacted the Medellin controller (as well as with each previous controller).

When told of "an issue with fuel" the controller was apparently preparing to bring them in next, which was kind of the controller—but not required. When issued the holding instructions the crew accepted them and took two turns in the holding pattern.

The captain, who as also an owner of the airline, may not have  wanted to admit that his planning was that bad, and he had gotten them into a terrible situation. Had he landed "safely" he may well have had legal action taken against him for violating multiple safety regulations, instead they did not admit their situation and not only the pilots, but most of the passengers paid the ultimate price.

There are many lessons in this accident. No doubt among them will be safety culture, fuel planning, and CRM. More will probably be revealed when the final accident report is issued. But clearly one clear lesson to put into play when all of the unexpected events pile up and you're short on fuel is that saying "an issue with fuel", "minimum fuel" or other similar terms does not get you the immediate priority handling that you need. The words "mayday" or "emergency" must be used. If still, you do not get what you need to land safely, then you must violate any clearance or other regulation to maintain the safety of the flight. In this you are not only allowed, you are required!
Repeat after me "Declaring an emergency, Proceeding Direct...."

In response to an article in the Washington Post on an in-flight severe turbulence event, one commenter (who also wrote to me) questioned:


Is it possible to fly around bad weather or just too costly in terms of time and fuel to do so?

I'm just an armchair captain, but what I have seen on flights I've been on recently is a willingness to fly straight through the weather instead of flying around it. Southwest flight from Minneapolis to Phoenix flew over thunderstorms in the Colorado area. Turbulence was moderate to significant, though not as severe as this article records. The pilots tried FL360, FL380, and FL400. Eventually FL380 gave us the smoothest ride but it was still really bumpy. So maybe more consideration should be given to flying around the weather rather than straight through it. I know that means additional fuel costs and possibly delays, but isn't that better than very uncomfortable passengers, or in this case, passengers fearing for their lives? I'm more than willing to accept a 15 minute or 30 minute longer flight in order to be comfortable, rather than a roller-coaster ride that gets me in 10 minutes early. The airline has to factor in that passengers may not fly that airline again if the in-flight experience is too severe. And yes, you should ALWAYS have your seatbelt fastened when you are seated. No argument there.

First, the premise “Why don’t pilots try to fly around bad weather?” presumes to know what the pilots have tried to do to detect and avoid the “weather.” Unless you have interviewed the crew or done other specific research on the specifics of that flight, you don’t know what the crew has “tried” to do.  In fact, in your own statement you say that “The pilots tried FL360, FL380, and FL400. Eventually FL380 gave us the smoothest ride but it was still really bumpy.” Of course, this indicates that the pilots tried at least other vertical options. It’s not likely you were informed of the lateral options that were considered.

Quoting the article about the Allegiant Air incident: "Initial reports from our crew indicate that it was unreported moderate clear air turbulence that caused the injuries and subsequent diversion.” It becomes much more difficult to avoid turbulence that you don't know is there.
Turbulence is caused by numerous factors, including, but not limited to, thunderstorms, tropopause and jetstream interactions, wave action (e.g., mountain wave), trough lines and their associated areas of convergence and divergence, and wake turbulence from other aircraft, among others. Several of which are referred to collectively as Clear Air Turbulence (CAT).

Correctly predicting CAT is a combination of art, science, and luck. Causal factors include jet stream/tropopause shear zones (which typically have the most significant turbulence in the area above the jet and at a lower altitude where the accompanying tropopause slops below the jet core known as the upper front). The temperature lapse rates in each air mass (either side of the Jet & Trop) will produce a variability in the thickness of the turbulent area either side of the tropopause (which can often be a 6,000 ft thick band of potential turbulence). Of course the height of the tropopause is often right in the operational altitudes of most airliners, and that height changes—sometimes up to 15,000 feet at the jet stream boundary, limiting options of vertical avoidance. Horizontal avoidance is also tricky, and it's often just not possible to "fly around" the continuous line of a jetstream. 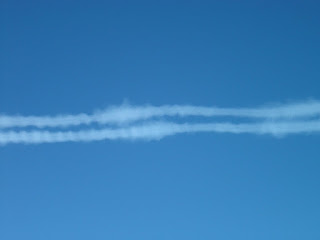 Wake turbulence, usually manifests itself as a short jolt of turbulence as the aircraft crosses behind the path of another, often out of sight, aircraft. It can be quite violent. You can often visualize this turbulence as a tornado like vortex in the contrail of a passing aircraft. The vortex spreads and settles with time, leaving its location hidden—if not accompanied by a tell-tail contrail.

Trough lines, while defined as a line of low pressure, also indicate areas of a shift in wind direction, often many hundreds of miles long, through a wide range of altitudes. The sift is often accompanied by a decrease in wind speed along the line resulting in areas of convergence ahead and divergence behind the trough line which result in vertical air movement generating turbulence. But not all trough lines generate turbulence. Predicting it requires an analysis of such factors as the speed of the trough’s movement and the degree with which the temperature and wind gradients are out of phase. These factors are usually not within the pilot’s toolbox, both in terms of the raw data and in terms of the ability to conduct the necessary analysis, since very few pilots are also meteorologists. 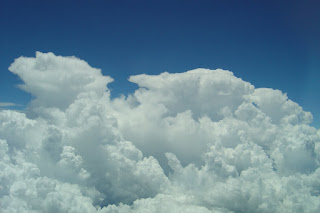 Thunderstorms are the more obvious hazard and are generally easier to see and avoid. However, even with thunderstorms there is a lot of variability as the turbulence is not limited to the confines of the cloud. The cumulonimbus disturbs the air around it, often throws hail out the top and is a dynamic beast capable of climbing at > 6000 feet per minute. Turbulence can exist for many miles downwind, even well clear of the cloud. Weather radar certainly helps, but it only indicates water, and not turbulence directly and requires a certain degree of skill and interpretation. If there were only one plane in the sky and the airplane had unlimited performance capability things would certainly be easier. However, any deviation requests must be coordinated with ATC which as to balance separation from other traffic restricted airspace and other constraints. The flight you were on was lucky that it had the capability to climb to FL380 or FL400, which is often not the case.

That said, different human and company attitudes are sure to apply in the aggressiveness with which different levels of turbulence are avoided. Operations on often-busy oceanic routes out of radar contact have even less flexibility available to crews for lateral or vertical deviations. Sometimes the best you can do is have everyone seated while passing through an area of turbulence that could not be flight planned arount. My own airline  is one of the few (if not the only?) airlines with a meteorology department which puts a lot of time, money, and effort into predicting and helping crews avoid turbulence, as well as educating pilots on its causes and avoidance. Its weather products are used by several other airlines as well. However, it is not a foolproof system. I can't speak for Allegiant Air, nor do I know what the upper-air charts looked like for that day. Sometimes you can be smart and avoid it, and sometimes no matter what you try, you can't.

Posted by Bill Palmer: flybywire at 5/09/2016 No comments: Links to this post