Thanks to Rob Mark for writing the foreword to my new book Understanding Air France 447.

Despite the fact that regulatory or investigative bodies have been labeling aircraft accidents as “pilot error” for years, I still feel my blood pressure rise when anyone uses that tag.  To be honest, there are very few aviation accidents these days that aren’t pilot error … the engine and airframe technology is simply so good today that systems aboard an airplane seldom fail. 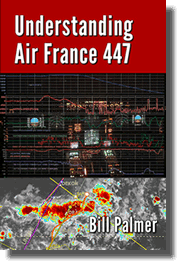 All too often however, the mainstream media doesn’t realize that pilot error is nothing more than a symptom of the accident and almost never the actual cause of the mishap. We already know the crew probably made a mistake. They were, of course, the men and women sitting in the cockpit at the time of the accident weren’t they?

But pilot error is simply the end of the road to a chain of unfortunate events … a road marker pointing to a much bigger problem. The real question everyone should be asking is why … why would experienced cockpit crews often make a series of seemingly simple blunders that lead to a tragic outcome.

Captain Bill Palmer and I first connected a few years ago through the aviation-industry blog – Jetwhine.com – I’ve been publishing since 2006. Jetwhine exists to stimulate discussions that bring random industry people together to speculate (another word non-industry types seem to hate) when things go wrong. I remember some of Bill’s comments to some of our stories, comments that made it clear early on that he wasn’t simply a man with an opinion. Bill Palmer was a man who knew what he was talking about and was someone who wasn’t afraid to go out on a limb putting the pieces together from which others might learn.
Jetwhine started running stories soon after the Air France accident, the first called, Lessons From the Crash of Air France 447, and others like, Air France 447: The Cost of What We’ll Learn. Bill and his thoughts and ideas jumped to the forefront when Air France 447 Pilot Error? Probably, but … was published in June 2011.

During the back and forth of the online conversations about those stories, Bill Palmer was there … not just adding opinions, but adding his technical expertise as an A330 instructor pilot, a veteran airline captain and as the man who’d written the A330 systems manuals for his airline. He explained the details of how things worked, as well as insights into how some systems might have added to the chaos in the cockpit that night over the middle of the South Atlantic. Sure there were people who popped up in our 447 discussions who tried to prove Bill Palmer didn’t know what he was talking about, but they didn’t last long. Knowledge and experience trump random opinion every time.

When Bill told me he was writing a book about the 447 accident to educate anyone willing to read it about what he believes might have happened that awful June evening, I wasn’t at all surprised. I was even less surprised when he told me another goal was to once and for all explain to people how the systems aboard the A330 actually worked, as well as some of the traps any computer creates for users unwilling or unable to spend enough time to understand them in depth.

So sit back and prepare to be educated, entertained and awed, yes, awed. For within the pages of this latest version of Bill Palmer’s book,Understanding Air France 447, readers will learn as much – or more – about the A330 than some line pilots probably know today.
By the time you’ve finished, you too will probably learn – as I did – the why behind what caused three experienced pilots aboard Air France 447, to not simply lose control of their aircraft, but to be so overwhelmed by the experience, that they were unable to regain control of the aircraft before it splashed into the sea taking 228 people to their deaths. With this volume, Captain Bill Palmer proves yet again, that pilot error only represents the beginning of a solid accident investigation.
Rob Mark, Evanston, IL
July 2013

Robert P. Mark is an ATP-rated pilot with both airline and private business jet aviation flying experience. He spent 10 years of his life in air traffic control with the FAA and has authored five books under the McGraw-Hill label. In addition to Jetwhine, Robert Mark serves as editor for AINSafety, the weekly online journal of aviation safety published by Aviation International News.